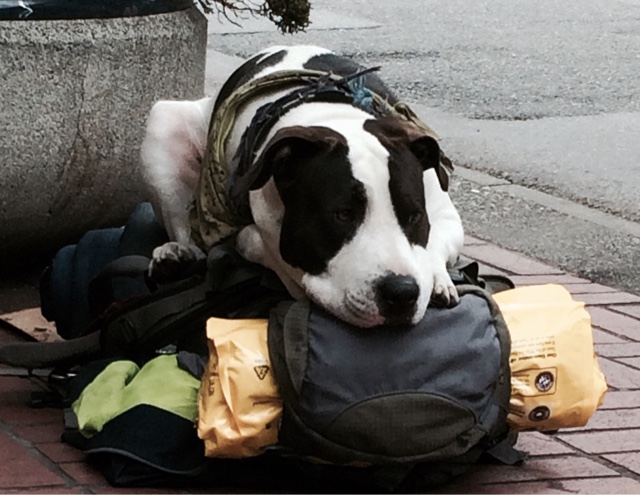 Of note this morning: overweight woman in a scooter buys four large bags of candy. As she reaches into her bag for her wallet, she pulls out a plastic bag that contains a single large milk bone. “I haven’t seen any dogs this morning,” she says to the Rite Ad cashier. “I don’t give money to ‘dem bums outside. But if they have a dog, I’ll give ’em a biscuit.”

Outside Rite Ad I hear several dogs barking. They are a block away, standing among a small group of people. Beside me, a man hosting a full length leg cast and tattered, street-stained clothes points a yellowed finger in the dogs’ direction and yells, “SHUT UP!”
And I think, “fat chance.”
Certainly the sound of the street–the cars, the busses, light rail zipping by, voices haling cabs, shouting about the “all mighty Lord Jesus,” speaking to lovers, to business partners, to friends, to enemies, into phones, into the wind to no one in particular–would drown out this one man’s voice.
Yet not minutes later, not even seconds, but immediately, the dogs quit their barking. I turn back and look at the man and he pulls his hand back into his pocket and smiles.
I am upon them now, three dogs two street people, all outside a Starbucks. The people hold signs, “Anything helps.” The dogs sit beside their humans, one climbs on a back pack. Lies down.
I give its owner a few bucks, and walk away, my eye out for the overweight scooter-woman with the bags of candy and the dog bone.
6/24/2015