Katie Lee, the 98 year old Arizona activist whose favorite word was fuck, died in her sleep on Wednesday, November 1st. Katie had dedicated her life trying to take down the dam that had drowned the place she loved most — Glen Canyon — the contoured caverns and seductive streams that today lies beneath the 9 trillion gallon reservoir known as Lake Powell. Before the building of the dam, Glen Canyon was considered to be one of the most beautiful canyons in North American, if not the world. Then, from 1963 to 1980, it was submerged.

I did not know Katie Lee. I’ve never met her, have never seen her in anything but pictures and films. But I wanted to know her. More than that, I’ve wanted to be her. In 1955, while civil engineers finalized their plans to choke the Colorado at Glen Canyon, Katie Lee and a few archeologists helped map the canyon’s soon to be lost heritage. They floated the Colorado, explored hundreds of side streams, climbed cliffs, and squeezed through slot canyons. They drank from fern-sweet springs, slept under the gauzy gaze of the Milky Way and howled and hooted and sang. They also sat in awe struck silence listening to the voices of ancestors susurrate with the wind.

Glen Canyon, when it wasn’t inundated, was very different in character from its neighbor, the Grand Canyon. The Grand is a steeply walled layer cake, one epoch set on top of another again and again and again. At its deepest, the layers are a hard black metamorphic causeway plunging the river into swift and narrow channels frothing with rapids. Glen Canyon is (was) the Grand’s quiet sister. The red walls (of which the upper layers can still be seen poking up from Lake Powell) are composed of Navajo Sandstone, a ruddy sedimentary deposit easily sculpted by water. It was a sensuous place where a water ouzels song could be heard above the soft murmur of the river. There, the Colorado drifted laconically between walls beveled as if in prayer to its master, the ever flowing river. But, despite the efforts of nascent environmental groups and the voices of people like Katie Lee and Edward Abby, Glen Canyon Dam was built. The concussion of its first dynamite blast set off by President Dwight D. Eisenhower from a telegraph line in Washington DC on October 15, 1956. 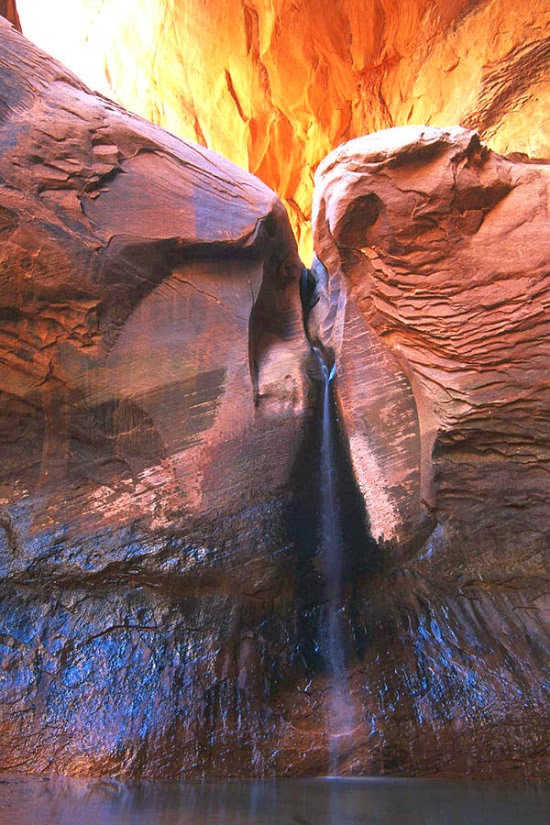 “You’d walk along and the next thing you’d see is this blue reflected from the sky, this beautiful, clear little pothole pool,” she said. “Every little grotto was full of frogs and birds and wildflowers. Plus, the incredible light was what nearly drove us all crazy. There was no light in the world like that. It isn’t the same in the Grand Canyon. I cannot tell you why. But when I finally saw Glen, it just captivated me.” Katie Lee

Katie Lee never got over the flooding of Glen Canyon. It haunted her like a murder.

It haunted her like an execution. Murder can be impulsive, a dark turn of the heart which is often followed by guilt and remorse. Executions are not. Executions are plotted and planned, papers are signed, jobs delegated. They are clinical and capped with codes which make the unimaginable not just imaginable, but legal. And they are never accompanied with regret or apology. Katie Lee’s preeminent love was lost when the waters backfilled Glen Canyon. Acre foot by acre foot, the place that held her passion was drowned. But from those slack waters bloomed a voice which was as hard as rock and as powerful as water. After losing her Canyon, the native Arizonan spent the rest of her life fighting for the places that needed to be fought for — the secret coves, the ancestral lands, the pinnacles, the cliffs, the bluffs and arroyos of the desert Southwest. And, of course, she fought until her very last day for the destruction of what her license plate labeled the DAMN DAM. Anger was her fuel. She wrote five books about the land she loved and the river she lost. She wrote songs, she had friends and lovers and a voice that never held back. Most people know Katie Lee from her cameo in the documentary, DamNation. In it, she shared photos taken of her during her final trip through Glen Canyon — her bare body pressed against its walls or straddling a crevasse. “It was the most natural thing in the world,” she said of posing “buck naked” for those photographs.

After the film came out, people began to reach out to the 90+ year old activist. “You should see the beautiful letters I get,” she told NPR reporter Renee Montagne in a 1999 interview about Lee’s book All My Rivers Are Gone. “Sometimes they’re a whole page and they say, ‘We saw you in ‘DamNation’ and how free you were and how this, and how that … and we want to know what to do! What can we do to help get this movement going?’ And I just keep thinking, God, you’ve gotta realize the world is not like it was then. But that doesn’t keep you from fighting. You’ve got to do it your way in this particular climate. I mean I didn’t have any of this ‘Tweeter, Bleeter, Flipper, FaceYourAss’ or whatever ‘Book’ it is. I mean, if they’re taking away things from you that you adore and love, it’s gonna make you mad. And it sure as hell made me mad. Made me mad enough to get off my ass and go to work,”

Fortunately, that’s happening. Last weekend I attended the Women’s Convention in Detroit, Michigan. This was a followup to the global march that took place the day after the inauguration of Donald Trump. Prior to going, I worried the turn out would be small and homogenous. A group of well heeled women overwhelmed by Trump’s onslaught on all they held dear: public lands, health care, clean air and water, reproductive rights, equity, education, a free and fair press, etc… What I found instead was one of the most diverse and powerful groups I have spent time with in a long while. Young, old, rich, poor, black, white, red, yellow, gay, straight, trans, muslim, jewish, wiccan, pentecostal preacher, X-con you name it and they were there and they were fighting mad. Their rights were being damned by the Trump Administration, and the hell if they were going to allow that to happen. These were women Katie Lee would have been proud of. Its leaders were well connected and exceptionally compelling 20-somethings, and they were filled with the ideas and the means and the passion and the power to make change happen. They spoke with audacity and authority and anger and love. But most of all they spoke with the determination of women who know they have work to do.

Katie Lee knew that the life-span of dams are fleeting when compared to the walls in which they encroach. One day, Glen Canyon Dam, like all dams everywhere, will blow out and its river will flow free. It’s inevitable. The force of water, the build up of silt, the relentless abrasions, they are no match for that man-made plug of sand and gravel. The same goes for Trump and his walls and the Tiki-torches that light his way. One day all of it, the man, the walls, the torches, the narrow fear-filled ideas he spews so carelessly will crumble, and the dreams and passion of the people he is trying to hold back, will break free.

All we have to do, according to Katie Lee, is get up off our asses and get to work.